The inventor, Mr. Junji Takano became a victim of tuberculosis when he was still a young boy. He started to look for ways and means to eradicate the disease in his body as well as those of his co-patients in the hospital. After World War II, there were only few medicines available in Japan. Some patients, including the inventor, did not get well in the hospital after so many months of treatment.

He decided to research about the disease called tuberculosis. After many years of study, he discovered that there are three kinds of tuberculosis. One is caused by mycobacterium (tubercle bacillus) which is contagious—this is curable, if not, it is controllable. The second one is not caused by tubercle bacillus, but by a certain electrical energy force—this is curable, if not, controllable by PYRO-ENERGEN. The third one is caused by both.

Patients suffering from the second and third kind of tuberculosis are not getting well by drugs, indicating that there is resistance against all kinds of drugs. X-ray results of such patients show positive tuberculosis spots in the lungs. If the sputum of such patients is placed into a laboratory to test for cultivation of tubercle bacillus, it yields negative result. Hence, it should not be labeled as tuberculosis.

In 1968, this discovery enabled the inventor to trace the origin of so-called incurable diseases and determined its eradication technique.

A mysterious energy force of electrical wave is the denominator of all kinds of incurable diseases and produces virus. This paranormal wave is responsible on almost all diseases including cancer, kidney diseases, diabetes, tumors, asthma, leprosy, arthritis, and many others. 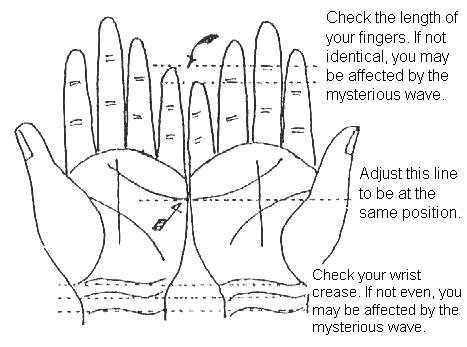 The inventor was curious about the structure of the palms when he was in the hospital. There he found a mysterious point. Most patients who suffer from viral diseases or incurable diseases have a similar pattern of palm figure as seen below.

The inventor discovered that most patients who are affected by the paranormal wave or suffering from viral diseases have different patterns of left and right palm figure. Most people who are disease-free have both palms identical (even). However, sufferers have amazingly uneven palms (their left fingers are shorter than the right or vice versa, or the palmar (or palm) creases are not even).

Have you ever heard that many patients who suffered from viral diseases got well after they got electrical shock or lightning? Electrical shock apparently made them well. Is there any connection between electrical shock and diseases? These events made the inventor understand the facts written in the religious scriptures that the illness is due to a paranormal wave. Of course, there may be another miracle that can heal viral diseases 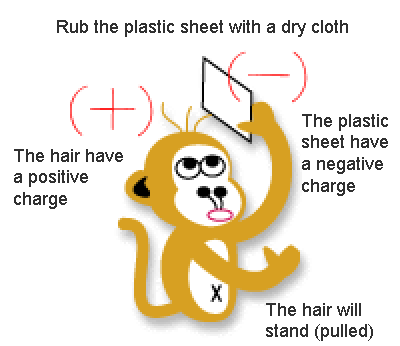 How to Produce Static Electricity – The Rubdown

For this reason, almost all school students in Japan practice rubdown. Rubdown with a dry towel is the best way to produce static electricity and drive away the paranormal wave from the body. Do this rubdown motion for several minutes a day and you can be free from viral diseases.

As shown on these pictures, Japanese pupils are rubbing with a dry towel with each other. This practice is done in most schools.

You must do it as long as you want to keep yourself healthy everyday. Short time trial of three days or so is ineffective at all. Rubdown with a dry towel on your body is the simplest way. However, after returning from heavy works in the office and factory, another work to rubdown is a hindrance for us. We want to rest and take a break. If there’s a way to eradicate viral diseases while resting, would you like it to apply the technique? That is also one of the reasons why PYRO-ENERGEN was invented.